As “America’s Best Known Living Folk Artist,” Warren Kimble draws on more than 50 years of experience as a fine artist, educator, and antiques collector to create a casual but sophisticated style of American Folk Art.

As Warren himself says, his style is “reminiscent of something that surrounds a person every day. It is simplistic, yet abstract.”

Among his most popular images are barns, houses, animals and Americana themes that reflect his love for landscapes in Vermont and rural America. Warren often paints on carefully selected wood for his canvas, using 18th-century tabletops or cabinet doors that have textural qualities due to their use by past generations. His warm and unique color palette adds to the overall feeling of serenity in his paintings, which are widely sought after both in the U.S. and internationally.

In response to his art work, more than 50 licensing partners joined with Warren from 1995 to present to create a series of quality products in range of categories, including artistic prints, calendars, furniture, home accents, wallpaper, dishware, and publishing. He has been ranked in License! magazine’s top 100 leading licensors.

Warren and Lorraine, his wife and business partner, live and work in the western Vermont town of Brandon, where they have been deeply involved in civic life and philanthropy for over forty years. They continue to be a strong force in community development, working together with other artists and community leaders to begin an artist’s guild, renovate the historic town hall, and rehabilitate a now thriving downtown.

Despite formally “retiring” in 2006, Warren and Lorraine remain active both in civic and artistic initiatives in Brandon and beyond. For instance, Warren has been actively involved through the Vermont Arts Council in leading a state-wide effort, “Palettes of Vermont,” to bring art to local public schools throughout Vermont. Lorraine is an active volunteer with the Opera Company of Middlebury, and both Lorraine and Warren remain active with the Brandon Artists Guild. In addition to continuing to produce classic folk art paintings, Warren has also formally produced and shown two collections that reflect new interests.

The first new collection, “Widows of War,” involves mixed media – including paintings and sculpture – in reaction to the Iraq War, specifically, and the toil of war, generally, on the wives, mothers, and children whose loved ones leave to fight in war.

Shortly after completing “Widows of War,” Warren Kimble completed a new collection in 2009. Entitled “Let The Sun Shine,” this collection of abstract oil paintings reflect an unusual optimism for the future through the textures, shapes, and color palette that Warren creates.

Warren Kimble’s paintings are collected worldwide and have been the subject of one-person shows in galleries in New York and Boston, as well as at Syracuse University and a three-year exhibition at Shelburne Museum in Vermont.

Warren graduated with a B.F.A. from Syracuse University in 1957. After an early career in advertising, he taught in public schools and later joined the art faculty at Castleton State College in Castleton, Vermont. His work has been profiled in Yankee Magazine, The Boston Globe, Vermont Public TV, and many other media outlets. In 2002, he received the highest alumni honor from Syracuse University, the George Arents Pioneer Medal. He is also the recipient of an honorary Doctor of Fine Arts degree from Green Mountain College in Poultney, Vermont. 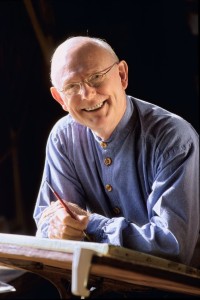